Official figures show the number of people claiming Job Seeker’s Allowance in Bristol West fell by 108 in the three months to the end of July – a fall of 1035 on the year.

“The Liberal Democrats have taken steps to ensure our labour market is fair and flexible - delivering opportunities for everyone and preventing exploitation of the most vulnerable.

“The employment growth that we are now witnessing is one of this Government’s key achievements.”

The Office for National Statistics figures also showed that the number of people claiming Jobseeker's Allowance nationally in August fell by 37,200 to 966,500.

And average weekly earnings, excluding bonuses, in the May to July period, rose by 0.7% from a year earlier.

“Today we’ve had another remarkable set of labour market figures, which show that the recovery in the labour market has been broad based.

“In the past twelve months alone, employment has increased by 774,000, with private sector employment rising by 794,000 on the year.

“This has led to an almost record share of the UK working age population being in work.

“The fall in unemployment is the largest in over 25 years with the number of people claiming Job Seeker’s Allowance below one million for the first time since the recession.” 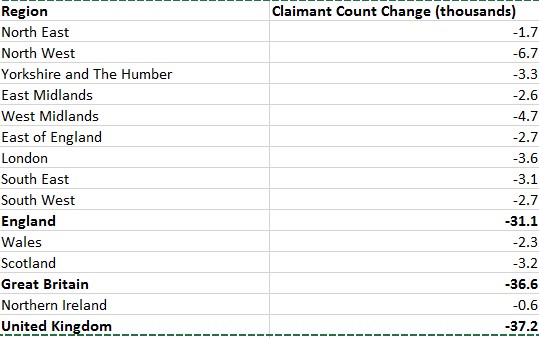