Liberal Democrats were the only major party to oppose and to vote against the illegal invasion of Iraq in 2003. We were the first to call for an Inquiry. We successfully campaigned for it to be held in public and for Gordon Brown and Tony Blair to appear before it but it is publication is still being delayed.

Join us in calling for the report to be published NOW 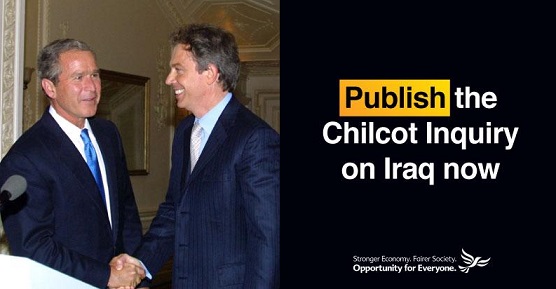 I have been a long-standing advocate for an inquiry into the British Government’s decision to go to war in Iraq in 2003: a decision which the Liberal Democrats have always opposed - the only major party to do so. I am proud of the fact that my party was united in opposing the over a decade ago.

Since being elected, I have voted for three major motions in 2006, 2008 and 2009, calling for the instigators of Britain’s involvement in the war to be held to account for their actions. Each time I voted to hold an inquiry as soon as possible, but each time the Labour party used their Commons majority to overturn the proposals, claiming that such an inquiry would undermine “important operations” in Iraq, and that “a time will come when an inquiry is appropriate”.

When the independent Inquiry into the Iraq War was first set up in 2009, the then Prime Minister Gordon Brown stated in the House of Commons that the final report would be published within a year.

Six years later and it is still being delayed. That means key figures like Jack Straw, Gordon Brown and Tony Blair could be getting off lightly thanks to the publication’s delay. They need to be held to account: the victims and the public deserve answers.

Join us in calling for the report to be published NOW