A group of Easton residents have been rewarded with a cheque for nearly £4,000 for their energy saving efforts as part of a landmark energy saving pilot project from local MP Stephen Williams, who presented it on behalf of Western Power Distribution. 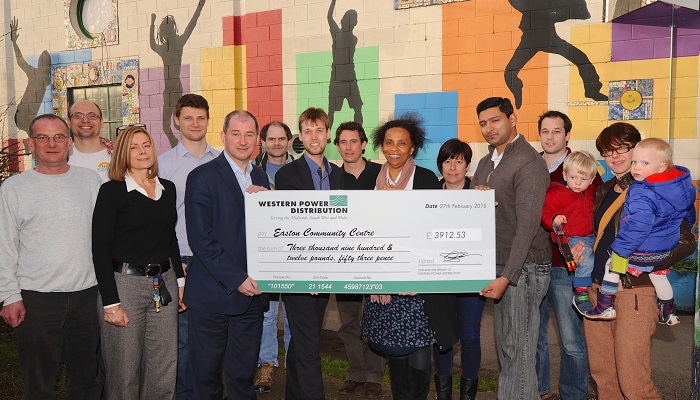 The reward comes as a result of households in Easton taking part in a yearlong pilot project led by Bristol-based Western Power Distribution (WPD) and the Centre for Sustainable Energy (CSE) which involved residents making small changes to their energy consumption habits to reduce electricity usage during peak hours and bank the money saved. The cash will go towards much-needed sustainable renovation works to the Easton Community Centre.

Delivering more than just community rewards for Easton and individual savings for its residents, the project has enabled CSE and the other energy charity partners involved with ‘Less is More’ to help determine the methods that work best in encouraging people to use less energy.

Launched in January 2014, the Less is More Easton project was part of an initiative undertaken as part of the wider energy demand reduction project ‘Less is More’, which was supported through Ofgem’s Low Carbon Network Fund (LCNF). Easton was one of just ten locations within the WPD region chosen to take part in the pilot.

The pilot has also helped WPD to better understand householders’ responses to energy related community engagement. This knowledge will allow the company to find cheaper and more customer-friendly engagement to preparing the electricity grid for the growth of low carbon technologies.

Local MP and Minister for Communities Stephen Williams has been an active supporter of the campaign since its launch.

Stephen Williams MP said: "This is fantastic news for local residents in Easton. I am delighted that this project has helped bring the community together and work collaboratively to develop a better understanding of energy usage and demand in general. WPD and CSE’s efforts in developing innovative ways to support local communities on such an important matter should be highly commended.”

Steven Gough, Western Power Distribution said: “We are pleased with the results of this project and enormously grateful to all of the residents and volunteers for their time and efforts in supporting ‘Less is More’. Ultimately, the most powerful learnings from this project have centred on community enthusiasm and helping local people to better understand their energy usage, which has continued to highlight the importance of WPD’s innovation work in this area.”

Patsy Newton CEO of Easton Community Centre said: "We are delighted to receive this donation from the Less is More project. This is a real endorsement of our aim to be at the heart of the community providing a sustainable and secure space that is valued and supported by the people of Easton and the surrounding area. The donation will be used for a much needed upgrade of facilities at the Centre, which will also help us reduce ongoing water usage and costs."

Rachel Coxcoon, CSE Bristol said: “Working on this campaign has been an exciting opportunity to raise awareness among the local community about energy usage and demand. It’s been great working with WPD, Easton Energy Group and motivated residents to help reduce their overall consumption. The Less is More project has also provided really useful feedback from the substation monitoring to help us know what’s most effective in terms of demand reduction.”

WPD is the electricity distribution network operator for the Midlands, South West and Wales. It delivers electricity to 7.8 million customers over a 55,500 square kilometres service area. Its network consists of 221,000kms of overhead lines and underground cables, and 185,000 substations. WPD employs over 6,000 staff.

The Centre for Sustainable Energy (CSE) is a Bristol-based charity which helps people and organisations from the public, private and voluntary sectors meet the twin challenges of rising energy costs and climate change. CSE’s mission is to share its knowledge and practical experience to empower people to change the way they think and act about energy. Although based in Bristol, much of CSE’s work has relevance and impact across the UK.

Easton Energy Group is a grassroots community group that helps individuals reduce energy use in the home organised by a group of Easton residents, many of whom work in the energy/sustainability industry.

About Less is More

Less is More project is one of Western Power Distribution’s (WPD) Low Carbon Network Fund (LCNF) projects that aims to determine the effectiveness of behavioural incentives to reduce electricity use and at the same time better understand the contribution that demand side responses can make to distribution network operators’ network management during peak times.

Launched in January 2014, it took place across ten communities in the Midlands, South and Wales until the end of the year. Between January and December 2014, a group of households in Easton connected to local electricity substations were able to see how much energy they were using, in real time, on a simple website (www.lessismore.org.uk) – and how it compared against their target. The idea was quite simply to use less, especially at peak times. The less that people used the more they were able earn in terms of a community reward for their local area. Easton residents earned a total of earned a total of £3,912.53.through taking part in the Less is More project.

About the Low Carbon Networks Fund

The LCNF allows Distribution Network Operators to invest in projects that look at how best to respond to the challenges of low carbon connections. The findings are intended to change the design and operation of the UK’s distribution network for the future.
For further enquiries please contact Farah Pasha (Instinctif Partners) on 020 7457 2833.