Stephen Williams was joined by Tim Farron MP, the leader of the Liberal Democrats, at the Arnolfinigallery on Bristol’s harbourside on Tuesday evening, to launch the party's West of England mayor manifesto. 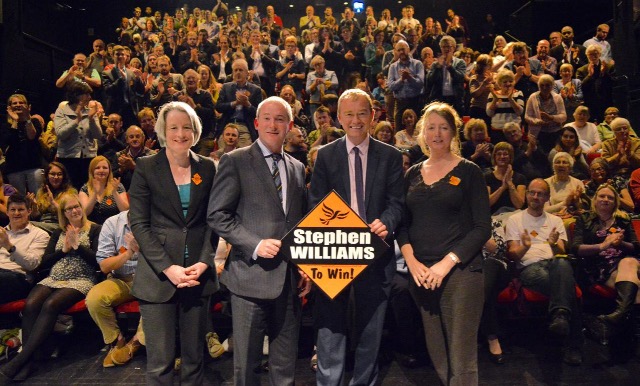 Standing as the Lib Dem candidate to be the West of England’s first regional mayor on 4th May, Stephen Williams unveiled the manifesto in a room full of packed supporters, promising to represent all communities of the region “together, with one voice”.

The manifesto covers four key themes: a prosperous economy, affordable housing, sustainable transport and adult skills. It has been created with the conviction that the region needs a strong economy not just to help fund public services but because growth and enterprise create jobs and opportunities for all. Ten of the flagship policies include plans to:

Stephen Williams is seen by many as the candidate with the most experience for the newly created regional mayor position. After the Lib Dems announced hiscandidacy, Ladbrokes quickly made him favourite to winthe election. This follows a string of council by-electionsup and down the country and the party’s overturning of a nearly 24,000 Tory majority in the Richmond Park Westminster by-election victory at the end of 2016.

“Stephen has set out an ambitious and deliverable plan, which will ensure the region remains a thriving, sustainable and attractive place to live and work. The manifesto demonstrates our party’s serious commitment to improving local services and the difference voting Liberal Democrat locally will make. I would urge anybody who wants to know more about what we stand for to have a look at our full manifesto and see what we are offering.

“This election is a chance for people to send a strong message against a hard Brexit that damages local jobs by pulling Britain and the region out of the Single Market. The Tories have destroyed their reputation for economic competence and Labour are focused entirely on in-fighting.

“The Liberal Democrats are the only party taking this election seriously. We are united, focused and in Stephen Williams the Lib Dems have selected a credible candidate with years’ worth of experience, who is respected by businesses and voters across the region”.

“We have incredible momentum as a party. We’re winning by-elections every single week, right across the country. We’re the only party unashamedly campaigning to keep Britain in the Single Market and to guarantee EU Citizens' the right to stay in the country. The party's record in winning elections since the EU referendum last year demonstrates that people can see that voting Liberal Democrat makes a difference to their lives.

“This election is a clear choice between me and the inexperienced, Brexit-defending Tory candidate and I will bring Bath, North East Somerset, Bristol and South Gloucestershire, together, with one voice."