In Europe, In Work

Over 3 million British jobs will be put at risk if Britain leaves the European Union. That's the grim fact that UKIP and some Conservative politicians are determined to ignore. 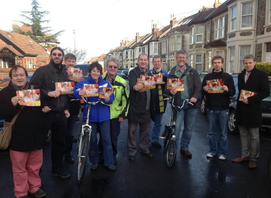 A recent CBI poll found that:

"The Liberal Democrats are fighting for a stronger economy by defending millions of British jobs and putting thousands of pounds back in your pocket.

"Businesses across the UK are horrified at the idea that Britain should pull out of the EU. Nearly three quarters of leading business people say it would be bad for the economy. But that's not stopping UKIP and many Conservatives continuing to call for Britain to leave.

"The EU is crucial to British jobs and growth and that's why I proud that the Liberal Democrats are the party of 'in'."

"Put simply it's in Europe, in work or out of Europe, out of work. Over three million jobs are linked to Europe and billions of pounds of trade is generated from EU trade agreements.

"The Lib Dems want Britain to stay in Europe so that we can deliver more jobs and growth here in Britain."

"The Liberal Democrats are the only party prepared to fight to keep Britain in the European Union."