Stephen Williams, MP for Bristol West and Minister for Communities, this morning joined Chief Secretary to the Treasury Danny Alexander in announcing £5 million of funding for the renovation of the Colston Hall. 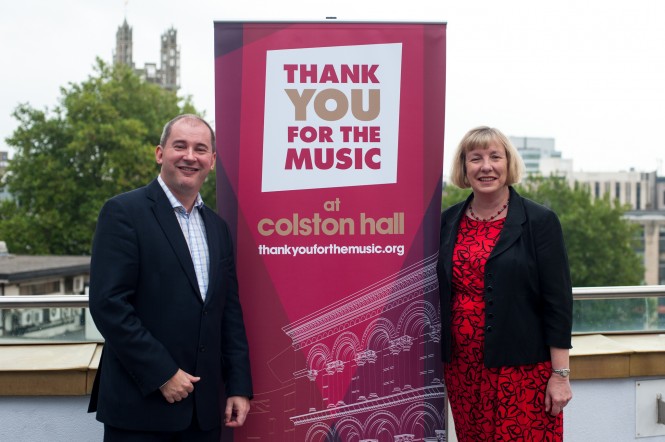 The funding will help to unlock wider investment to transform the grade II listed venue into the only international standard concert hall in the South-West, capable of hosting a philharmonic orchestra.  It will also help to allow Colston Hall to hold over 500 performances a year, including with national and international flagship orchestras.

The ‘Thank You for the Music’ campaign, which aims to raise the £45 million needed to refurbish the hall, had its national launch at an event in Parliament last week. Mr Williams, who hosted the event, made a commitment to push for government funding and has welcomed the Treasury’s commitment to the project.

Speaking about the announcement, Stephen Williams, MP for Bristol West and Minister for Communities, said:

“I am delighted that the Treasury has committed to providing £5 million of funding for the Colston Hall. I have been pressing this issue in government for several months and today’s announcement represents a big step forward for the ‘Thank You for the Music’ campaign.

“Colston Hall is one of our city’s most iconic and popular venues. It is vital that it continues to offer top quality facilities and attract the best performers from across the world. The £5 million announced this morning will go a long way in ensuring this.”

“Colston Hall is an extremely important local and national musical institution. I am delighted to announce £5 million of Government funding for the regeneration fund today, in response to the passionate and dedicated campaign by ‘Thank You For The Music’ and local MP and Communities Minister Stephen Williams.

“This funding will help ensure that the Hall continues to be enjoyed by generations to come, and I urge everyone in Bristol and beyond to continue to support the campaign.”

“I am thrilled that the importance of Bristol Music Trust and our ambitious plans to transform Colston Hall have now been recognised by Central Government. There is still more to do to ensure the successful transformation of the Hall and our campaign will continue. However, this is a fantastic first step towards us securing the future of the Hall for future generations.

“I was delighted to welcome the Chief Secretary to the Treasury to the Hall today and all Bristolians should be grateful to Stephen Williams for his steadfast championing of the Thank You for the Music campaign.”

The proposed £45 million refurbishment for Colston Hall will see a complete modernisation of both the main concert halls and the smaller theatre, but will also provide the infrastructure to put on 500 events a year by 2020 - a 20 per cent increase from today. The hall will also be doubling the number of conferences and non-music events in order to help increase revenue and ensure better financial stability.

Education is a key focus of the campaign. The funding is due to give a boost to Bristol Plays Music, an organisation to promote music education and opportunities to perform for young people. Furthermore, the hall plans to establish a learning centre to engage schoolchildren and help Bristol become the UK's capital of young people's music.

Colston Hall is currently the only music education hub in the country to be based in a professional performance venue, and is already responsible for delivering the National Plan for Music education to around 10,000 local children in 130 schools a year. Last year 15,000 children were able to enjoy or take part in performances at the hall.

More information about the ‘Thank You for the Music’ campaign can be found at: