This Monday (26th January) Stephen Williams MP visited the MV Balmoral, currently docked in Bristol, to announce the success in its application for a government grant. 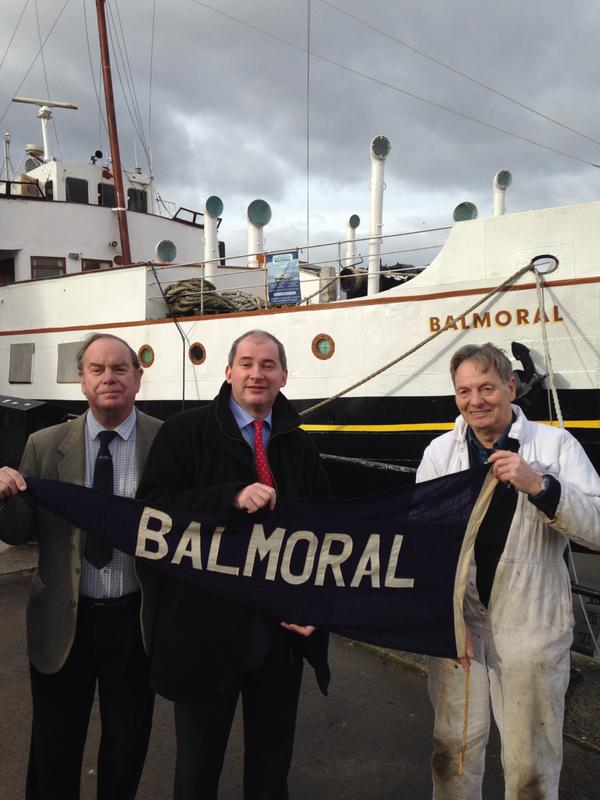 £344,000 has been awarded to the Balmoral Fund after its successful application to the Coastal Communities Fund. This much

needed grant will help pay for further repairs, as well as a crew and a new operating company to run and market the vessel.

Stephen Williams, Liberal Democrat MP for Bristol West and Minister for Communities, announced the success of the grant application to a room full of hardworking volunteers after being treated to a tour of the vessel by some of the people dedicating their time and expertise to get her sailing again.

Video of Stephen’s tour, courtesy of the MV Balmoral Fund

“It was a fascinating tour that gave me an opportunity to hear about the great history of the ship and to see the hard work that the dedicated group of volunteers are doing.

“The funding I announced today will provide a real chance for getting the Balmoral back in service, creating jobs and giving a real boost to tourism in Bristol, the South West and beyond.”

The Coastal Communities Fund is funded by the government with the income from the Crown Estate’s marine assets. Since its creation in 2012, the Fund has invested £116m around the UK’s coastline, funding 211 projects, which will create almost 12,400 jobs and provide over 6,000 training places and apprenticeships. For more details visit the government’s website here: https://www.gov.uk/government/news/record-funding-for-36-seaside-towns-that-will-kick-start-jobs-and-apprenticeships

The MV Balmoral is an historic passenger ship that first entered service in 1949. It was built as a replacement for the paddle steamer PS Balmoral, which was built in 1900 but not reconditioned after World War II. Find more information about the great ship here: http://www.heritagesteamers.co.uk/balmoral/about.htm