This week has seen a lot of good news. Legislation banning revenge evictions was passed, the minimum wage is increasing again, and the employment rate is at its highest level ever! On Wednesday the Budget provided more good news and it was packed with Lib Dem policies. Let us have a look at some of the highlights. 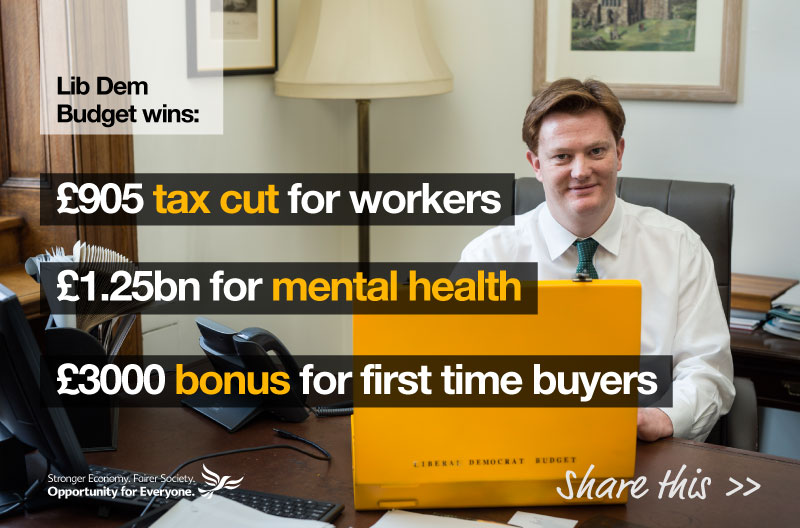 We are delivering a tax cut worth £905 for millions of workers. From April 2015, the personal tax allowance will be increased to £10,600 and the Budget has confirmed that it will rise still further to £10,800 in 2016/17 and to £11,000 by 2017/18. Increasing the tax allowance to £10,000 was on the front page of our manifesto, and we have gone even further than promised in government. Over 27 million people will benefit from the tax cut, while and 3.7 million people have been taken out of tax altogether!

Lib Dems want to make sure that the banking sector pays its fair share towards the economic recovery.  In the Budget, we announced that the bank levy rate will increase from 0.156% to 0.21% from 1 April 2015.  This will raise around £4.4 billion in additional tax receipts by the end of the next Parliament.  We will also make banks’ customer compensation payments non-deductible for corporation tax purposes.  This will increase banks’ corporation tax payments by almost £1 billion over the next five years. We have always been clear that the books should not be balanced on the backs of the poorest in society. Now that the banks’ profits are up, it is only right that we get them to pay more.

First time buyers will be able to save up to £200 per month into a Help to Buy ISA. Through the new Help to Buy ISA, for every £200 saved, the Government will contribute £50 (or 25% of the amount saved) up to a maximum total of £3,000. The Government bonus can only be put towards a first home located in the UK with a purchase value up to £450,000 in London and up to £250,000 in all other parts of the UK. It is anticipated the new scheme could benefit up to 1.2 million people. In the South West, this measure could help over 95,000 people to purchase their first home in the next 5 years.

From April 2016, individuals will benefit from a new Personal Savings Allowance of up to £1,000 for basic rate taxpayers and £500 for higher rate taxpayers, Liberal Democrat Chief Secretary to the Treasury Danny Alexander has announced. Additional rate payers will continue to pay tax on all their savings income. This is a major tax simplification and will mean that 95% of taxpayers can now save completely tax free each year and choose form a range of savings products to meet their specific needs. In the South West this could remove up to 1.46 million people from savings tax liability.

Cracking Down on Tax Avoidance and Evasion

Liberal Democrats are cracking down on those who dodge tax.  We have closed over 40 loopholes so far, which has resulted in billions of pounds in additional tax being collected over the course of this Parliament.  Lib Dem Chief Secretary to the Treasury Danny Alexander has announced that we will go further and crack down on off-shore tax evasion and aggressive tax avoidance on those who are serial avoiders. Taken together, all the new measures against tax avoidance and evasion will raise £3.1bn over the forecast period.

Click here to see what we have already achieved